OMOKS development company is a developer of /Chaika\ Residential Complex – the first new town of independent Ukraine with a full range of engineering and social infrastructure.

The OMOX company was founded in 1995. The main field of its activity is the organization and management of construction projects, namely: 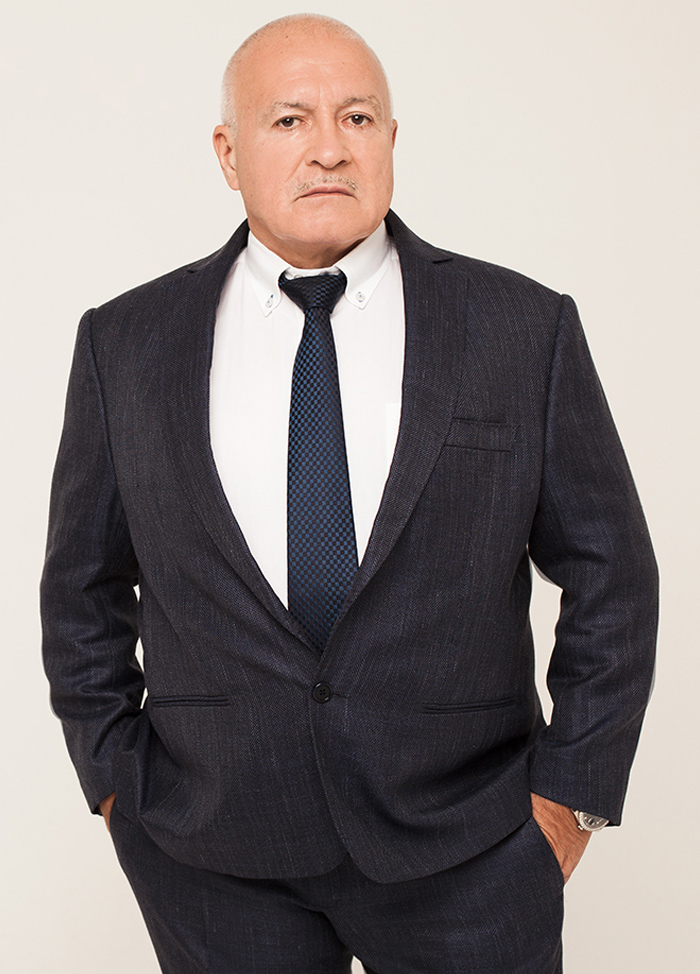 The managing owner of OMOKS development company is Alexey Kulagin, the Deputy of the Petropavlovsk-Borschagovka Village Council of Kyiv-Sviatoshynskyi district of Kyiv region of VII convocation, the member of the Board of Directors of the Confederation of Builders of Ukraine, the Candidate of Technical Sciences.

Starting from 1981 he worked at Luganskshahtostroy Plant, he made his way from a foreman to CEO.

In 1982, he managed a detachment of Lugansk miners in the Kaluga region engaged in "development of non-black earth area".

In 1985 he defended his thesis on "Foundation engineering" at the Moscow Central Research Institute of Building Structures.

In 1986 he headed a group of miners in the aftermath elimination of the accident at the Chernobyl nuclear power plant and supervised the construction of housing for immigrants from the Chernobyl zone (city of Slavutych, the villages Nadra and Savarki).

In December 1988, after the earthquake in Armenia, he managed the rescue squad with 400 people in the city of Leninakan.

From January 1989 to 1991 he headed a detachment of 7,500 miners to restore the housing stock of Kirovokan city - Taron 1, Taron 2, Taron 3, Taron 4. He took part in the calculations for the creation of Building Regulations for more than 12-point seismic.

Until 1992, he had worked throughout the USSR as one of the "crisis managers " of the Ministry of Coal Industry of the USSR (Kuzbass, Karaganda, Vorkuta, Baikonur, etc.) on the construction of special facilities.

For services to the state Alexey Vladimirovich was awarded the Order of Lenin, the Order of Friendship of Peoples and the title "The Honored Builder of the USSR".

Since 2003, he held the position of Deputy Head of the Main Department of land resources of Lugansk region, where he created the regional department of evaluation and organization of the land market.

In 2005 he launched a large - scale project of /Chaika\ Residential Complex construction - the first new town of independent Ukraine for 25,000 residents on a 39 hectares land plot of Kyiv-Svyatoshynskyi district. The project has been implemented in 5 stages: /Chaika-1\ - /Chaika-5\.

The quality of construction and servicing format of this complex were awarded by 12 professional prizes and 41 awards.

In total, 70 km of engineering networks have been laid, which are able to service the town with a population of three hundred thousand residents. It should be noted that today the engineering networks created by OMOX development company are used by all residential areas that are being built in the village of Chaika.

/Chaika\ Residential Complex is one of the many successful projects of OMOX development company. You may see and learn more about the most ambitious and large-scale projects on the official website of the developer.

"We are not just building, we are creating a space for simple Human stories: stories of love and happiness!" 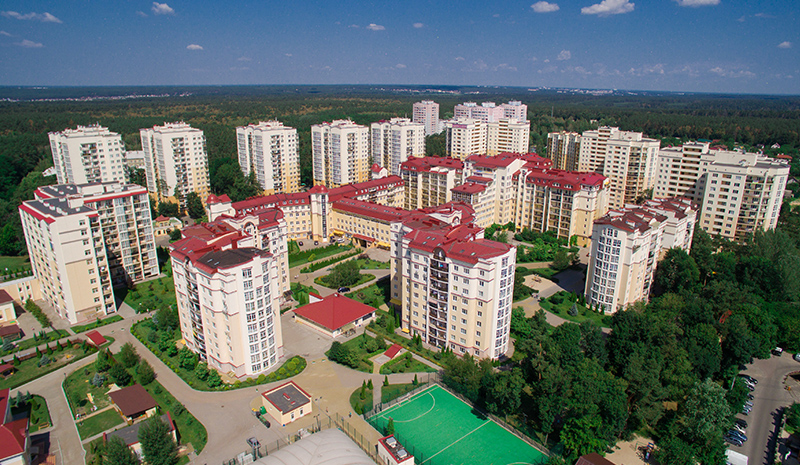 In 2007, the first houses of /Chaika-1\ project were commissioned including 18 buildings with a height of 4 to 15 floors, as well as infrastructure facilities, its own boiler room, multi-level indoor parking lot, outdoor parking lots for more than 1,000 parking places, a private kindergarten /Golden Fairy Tale\, European School of I-III degree, 11 playgrounds, a tennis court and a football field. In 2013, /Chaika-1\ project was successfully completed. 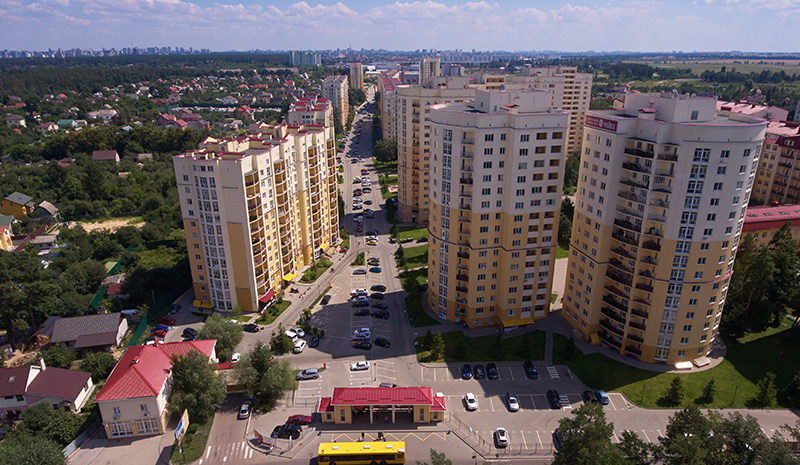 The completion of the project will be the commissioning of the house 26 building 4 and shopping boutiques. 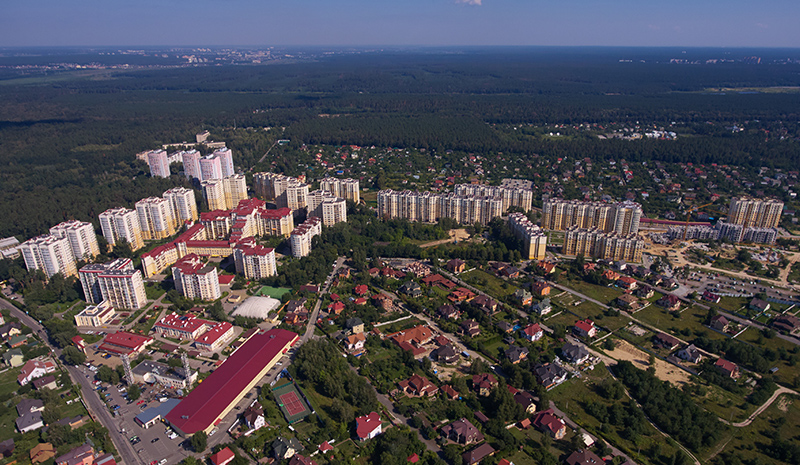 /Chaika-3\ project includes construction of six apartment buildings with 9 to 16 floors. In 2018, the construction of the first house No. 22 on Lobanovsky street started. 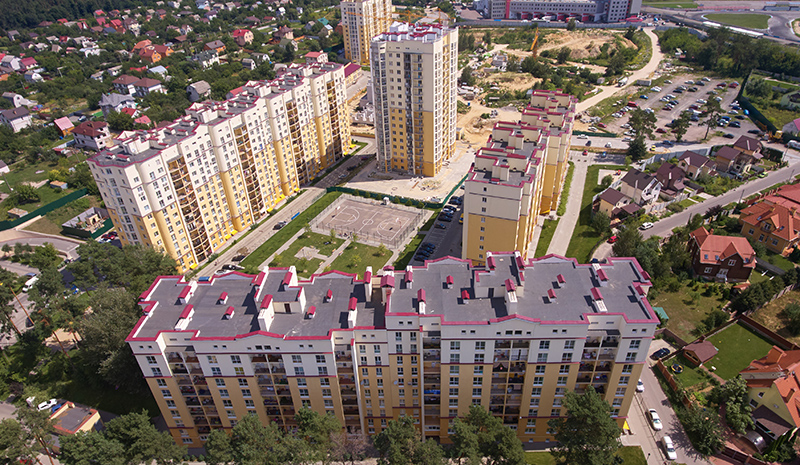 The construction of /Chaika-4\ project has already begun,  house No. 30 on Lobanovsky street for 580 families is being built, the sale of its apartments started in January 2018. The new building consists of five sections with a height of 13 floors. House’s design provides horizontal heating and individual heat meters. 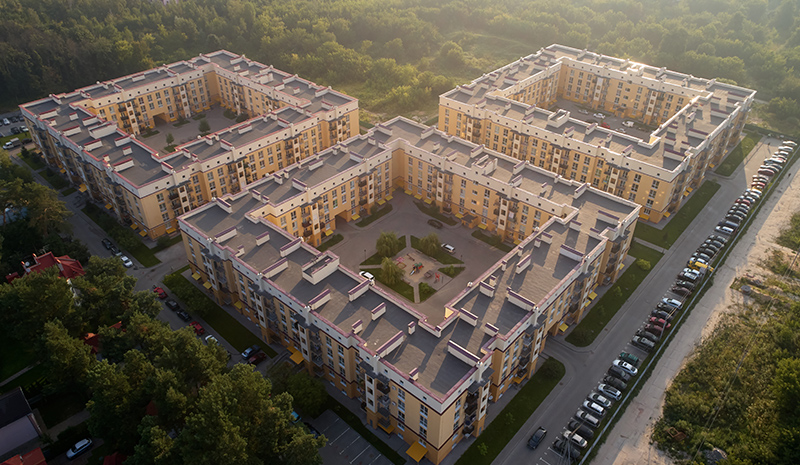 The fifth stage provides for the construction of four-storey houses with a total area of 90 000 m2. 3 houses have been already built and put into operation: No.24, 26 and 28 on Pecherskaya street, parking lots and playgrounds. Completion of all stages of /Chaika\ Residential Complex project is planned before 2025.